This page introduces a series of thematic initiatives – many of them still on-going – that support the mission of One More Voice. The growth of these initatives reflects the central objectives of the project's second development phase, but also builds on a foundational characteristic of One More Voice as a relational initiative, one that operates in solidarity with and in support of other people and projects. 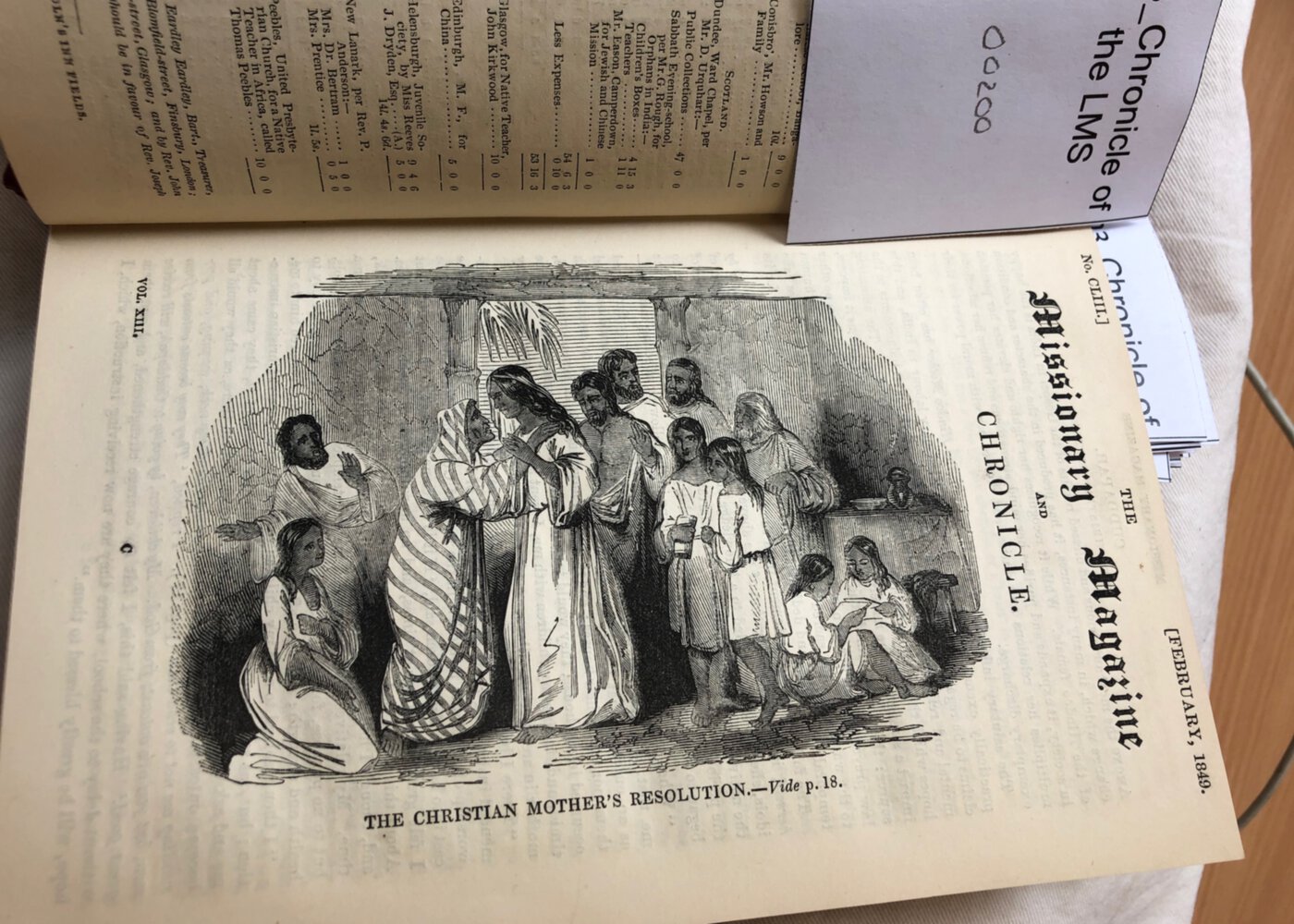 Anonymous, “The Christian Mother’s Resolution,” Missionary Magazine and Chronicle 13, no. 153 (February 1849): 1; also see 18. Public domain. This image (1) relates to a “brief statement from the memoir of a female convert, written by herself” (18, emphasis in original), one of the periodical pieces identified and documented as part of developing the BIPOC Voices initiative discussed in this section. Both the image and narrative gesture towards the real-life, autonomous activities of an older Indian woman. However, the focus on the Christian dimensions of such activities – in a missionary periodical – raises questions about the level of British mediation involved in recording the activities and, as a result, points to the interpretive complexities raised by the materials documented by our BIPOC Voices initiative.

BIPOC Voices from the Victorian Periodical Press (2022, anticipated) will draw on the work of two separately-funded initiatives to identify, document, and bring together in digital form a range of texts from the Victorian periodical press by BIPOC (Black, Indigenous, and People of Color) creators.

The first initiative (2021-22), funded by an Arts & Humanities Research Enhancement Program Grant ($15,000) from the University of Nebraska-Lincoln (UNL), seeks to establish a publishing partnership between One More Voice, COVE (Collaborative Organization for Virtual Education; a non-profit teaching and publishing platform), and the Special Collections of SOAS Library (a premier institution for the study of Asia, Africa, and the Middle East). The second initiative (also 2021-22), funded by a Field Development Grant ($27,500) from the Research Society for Victorian Periodicals (RSVP), takes up similar work, but brings One More Voice and COVE into partnership with commercial publisher Adam Matthew Digital (AMD).

As a first step towards developing the BIPOC Voices collection, the UNL-funded collaboration has already (October 2021) identified and documented a large number of relevant voices from the missionary periodicals held by the Special Collections of SOAS Library. This early work signals the overall potential of both the UNL- and RSVP-funded initiatives to transform current critical knowledge about the presence of such voices in the Victorian periodical press.

Unsung Voices of Color: An Undisciplined Anthology of Folklore and Supernatural Fiction, 1868-1930 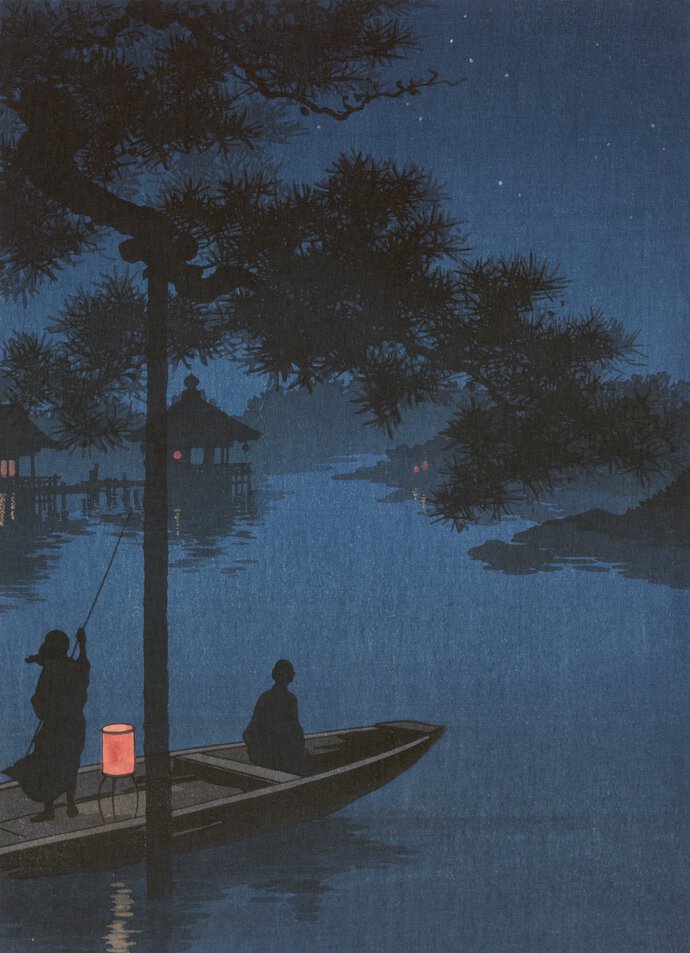 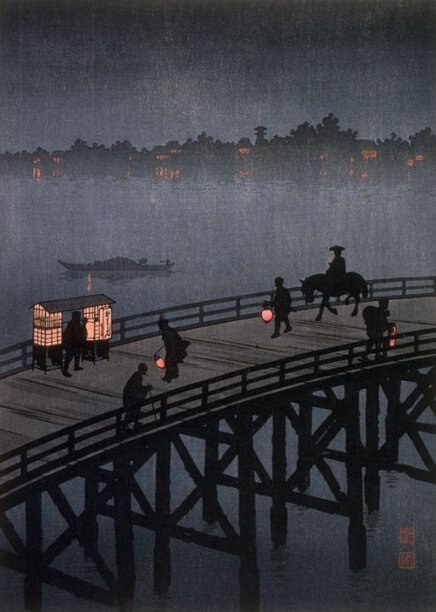 (Top)(Left) Shoda Koho, “Lake Biwa” (Woodcut, [Between 1900 and 1920]), FP 2 - JPD, no. 1571 (B size) [P&P], Library of Congress. Prints and Photographs Division, Washington, D.C. No known restrictions on publication. For more information, see Fine Print Collection - Rights and Restrictions Information. The Library of Congress titles this woodcut as “Yoru No Shubi No Matsu [Shubi Pine].”
(Bottom)(Right) Hiroshima Koho, “Night View of Ohashi Bridge” (Woodcut, [c.1900-1915]), 1963.30.5317, Fine Arts Museums of San Francisco, San Francisco. Courtesy of Fine Arts Museums of San Francisco. The Materials are made available for limited non-commercial, educational, and personal use only, or for fair use as defined in the United States copyright laws. Shoda Koho’s Lake Biwa and Hiroshima Koho’s Night View of Ohashi Bridge come from the publisher Hasegawa/Nishinomiya’s series of 21 prints known as the “Night Scene Series” (1910-1930). Japan is one of the countries featured in Unsung Voices of Color. This anthology, developed by students in a course at the University of Virginia under Indu Ohri’s guidance, brings together supernatural fiction and folklore from around the world between from 1868 to 1930. Students voted for Lake Biwa to be the anthology’s cover image because its spooky, unsettling atmosphere fits with the anthology’s theme.

Unsung Voices of Color: An Undisciplined Anthology of Folklore and Supernatural Fiction, 1868-1930 (2022, anticipated) grows out of an introductory literary seminar, “Uncovering 19th- and 20th-Century British Writers of Color” (spring 2021), that Indu Ohri taught at the University of Virginia in partnership with One More Voice. This class centered on expanding students’ and the public’s knowledge about, first, the folklore of colonized subjects and, second, supernatural fiction by writers of color under British rule or western imperial influence between 1868 and 1930. The students used One More Voice as a source for their course readings and for the focus of their final project, the anthology.

The anthology and video series are part of the planned development of a “Works of Folklore” section on One More Voice that will build on the current folklore subsection in the Bibliography and will be accessible to a general scholarly audience of educators, graduate students, and college students. During this period, colonial administrators collected and published folklore with the help of local coauthors (often uncredited), and such collections frequently had problems with translation, transcription, and accuracy. The anthology and video series will provide an alternative to such Eurocentric perspectives by foregrounding the voices of indigenous groups and people of color who shared their traditions with the British, coauthored folklore collections, and wrote their own supernatural fiction. 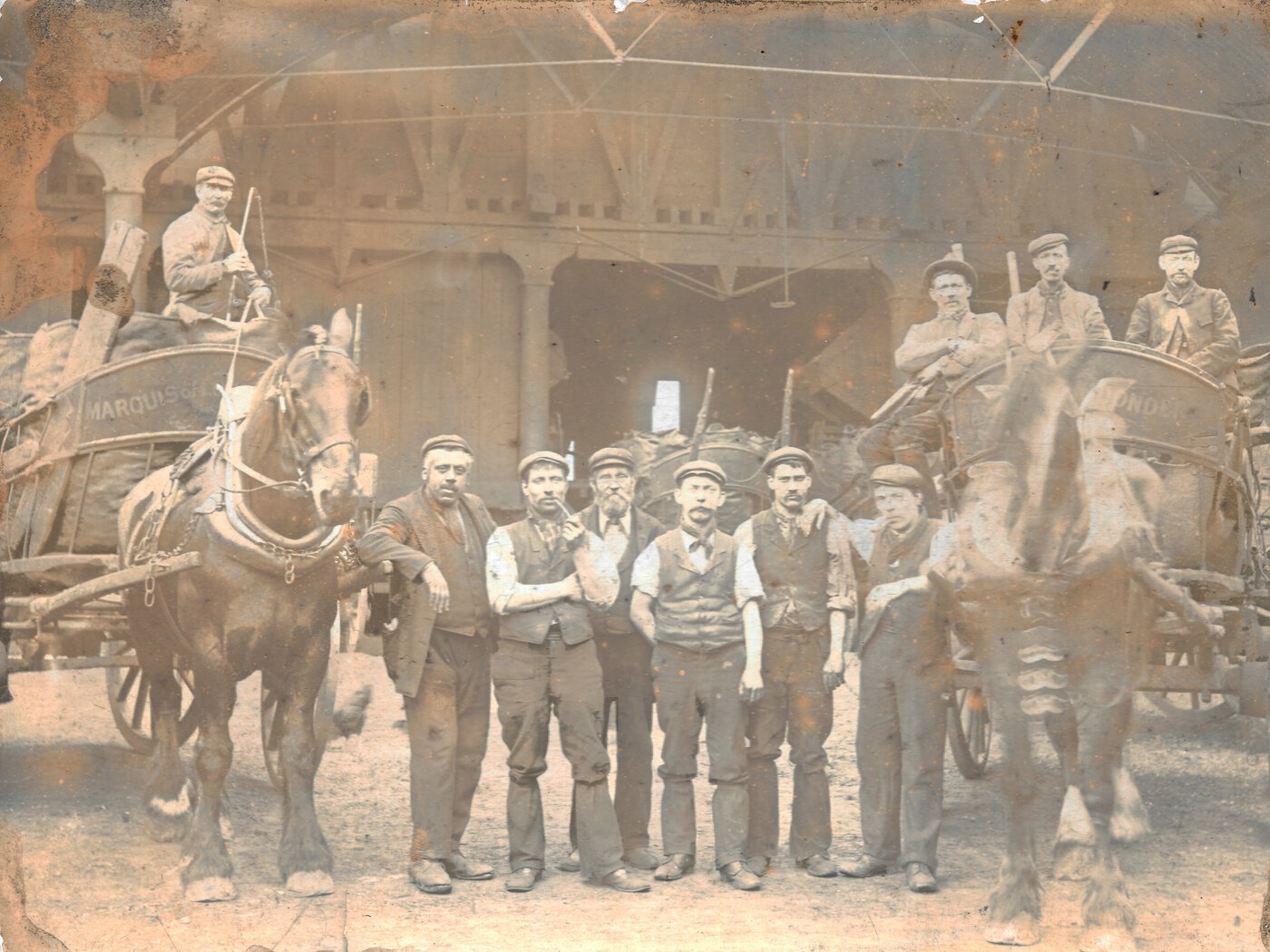 Anonymous, “Group of Workmen (Including William Ivens Craft) with Two Horse-Drawn Carts” (Photograph, [c.1910]), Personal image collection of Martin Copeland. Used by permission. This is the only known photograph of William Ivens Craft. He appears in the image leaning casually against the left-hand cart with one elbow resting upon the shaft. This photograph of William Ivens in an English coal yard among mostly-white fellow workers reflects the complex racial dynamics that the One More Voice digital exhibition will explore. Moreover, although the story of his parents – William and Ellen Craft – remains famous due to their sensational escape from slavery, William Ivens' own struggles and quest for belonging in the post-emancipation transatlantic world have received considerably less attention from historians, thereby making the recovery work of the planned exhibition all the more significant.

William Ivens Craft and the Victorian Atlantic World (2022, anticipated), a digital exhibition currently being developed by graduate student Hope McCaffrey (Northwestern University), will piece together the life of William Ivens Craft, whose personal history exemplifies the struggle and perseverance of individuals who lived a generation removed from American slavery, but who were still subject to the far-reaching transatlantic impacts of this racist institution. The exhibition’s twelve digital rooms (i.e., separate but linked web pages) will engage with the themes of transatlantic anti-Blackness, what Saidiya Hartman calls “afterlife of slavery,” the tumultuous politics and rampant racism in the post-emancipation Atlantic world, and citizenship in the context of the emergence of the modern nation state. This exhibition will also bring together over twenty unpublished letters from the Bodleian Library, Oxford by William Ivens Craft and others in his world, including Ellen Craft, Elizabeth Pease Nichol, and Robert Nicholas Fowler.

Through this approach, the exhibition will explore William Ivens Craft’s experience in the Victorian Atlantic world and the ways in which his life intersected with the foregoing currents in order to illustrate the reach and enduring consequences of racial slavery and the journeys of those who fought against it and its remnants. The exhibition will also seek to cultivate a generative methodological and representational pedagogy that centers BIPOC (Black, Indigneous, and People of Color) voices and privileges polyvocal and non-academic epistemologies.

William Ivens Craft lived in the midst of an Atlantic world adjusting to abolition, drawing new lines around the rising nation-state, and grappling with the world-warping technological advances in transportation and industry. He was born and educated in England, spent the years of his adolescence in Georgia, then returned to England hoping to find better prospects than the American South – recently reclaimed by white supremacists and “home rule” – could offer. William Ivens carved out a living and sense of belonging in Victorian London despite facing a web of transatlantic anti-Blackness. For instance, he encountered paternalistic attitudes from former white abolitionists, struggled to find stable housing and clothing, and ultimately established roots in England, where his descendants still live.

Inheritors of the Craft family history, who span the Atlantic world, continue to recount the family’s remarkable escape from slavery and encourage the incorporation of the family’s legacy into the historical memory and built environment of England. The narrative of William Ivens’ life, as presented in the digital exhibition in conjunction with archival documents and critically-encoded editions of letters published by One More Voice, will offer an alternative understanding of post-emancipation history through the story of one individual whose life that history impacted considerably. 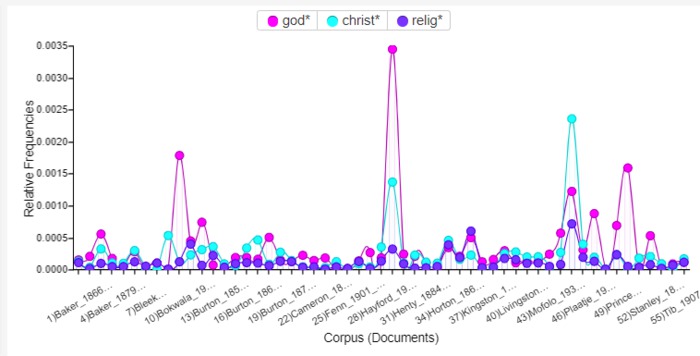 Caitlin Matheis, “Religion Frequency Chart 1” (Visualization [Voyant Screenshot], 2021). Creative Commons Attribution 4.0 International. This visualization demonstrates some of the initial computational analysis Caitlin Matheis (University of Nebraska-Lincoln) carried out on the Corpus of Africa-Centered Literary Works that she developed. In this visualization Matheis explores the inclusion of religious elements in the corpus, whether as a justification for colonization or as part of discussions of local African cultural practices.

The project for Corpus of Africa-Centered Literary Works, 1830-1930 (2021), funded by the University of Nebraska-Lincoln’s Emergency Research Gap Funding Program ($2000) and a Research Assistantship from the English Department, focused on the development of a corpus of Africa-centered works and supported preliminary computational text analysis of the corpus.

Over the spring and summer 2021 semesters, Caitlin Matheis, a graduate student at UNL, developed the corpus so that it brought together 62 plain text (TXT) files of nineteenth- and early twentieth-century literary works in English. The resulting corpus, now published in full by One More Voice, contains over 6.5 million words and balances both fiction and non-fiction works as well as African- and British-authored works (31 authors total are represented). To support further study of the corpus, Matheis also authored a critical essay (PDF) that outlines her initial work in using computational text analysis (especially Voyant Tools) to engage with the corpus and, separately, created a series of annotated screenshots that explore the corpus using a variety of visualization techniques.

Note: At present (2021-22), graduate student Raymond Malik (Purdue University) is encoding the corpus for COVE via a 0.5 FTE Research Assistantship (2021-22). Malik’s work will ultimately lay the basis for an enhanced version of Matheis’ corpus.

Lead image commentary: Initial work (summer-fall 2021) for the BIPOC Voices initiative has drawn attention to the variety of global creators whose work and words appear in Victorian-era missionary periodicals such as those pictured here. These elements demonstrate that the periodicals are part of a shared global heritage and that key BIPOC-related elements of the periodicals should be made available to as wide an audience as possible – a point that adds a further level of significance to the work of the BIPOC Voices initiative.