IN our Number for November last we mentioned the King of Dahomey was intending to attack Abbeokuta. Letters recently received from that city inform us that he was then within a few days' march, and that the Abbeokutans were preparing to defend themselves

The regular army of Gezo, the King of Dahomey, consists of 12,000 troops, of whom 5000 are female soldiers, called Amazons. We present a sketch of one of them.† The Amazon is dressed "in a blue and white striped cotton surtout, the stripes about one and a half inch wide, of stout native manufacture, without sleeves, leaving freedon for the arms. The skirt or tunic reaches as low as the kilt of the Highlanders. A pair of short trowsers is worn underneath, reaching two inches below the knees." A girdle, with a cartouch-box attached, tightens the dress around the waist. On the head is a skull-cap of white cotton, with devices of various kinds. The device of the regiment to which the soldier belongs is that of an alligator. They are all armed with long Danish guns, a short sword, and a sort of club. Many are the sufferings which the fierce soldiers of Gezo have inflicted on the surrounding nations. 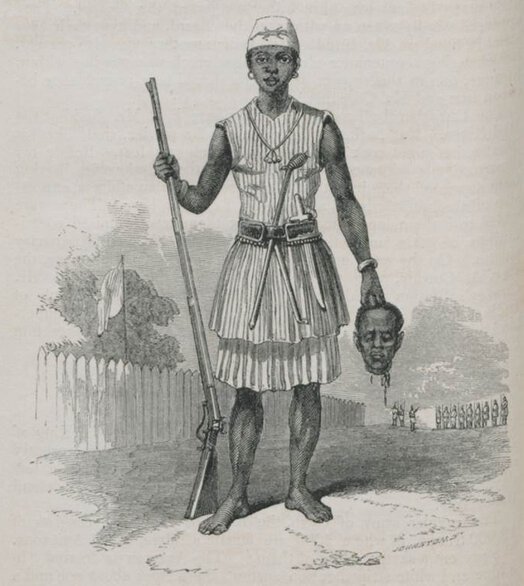 Their usual mode of proceeding is by surprise. Having arrived during the night in the neighbourhood of the town which they intend to assault, they make a rush on it about two hours before daybreak. It is probably defended by "a broad close-growing fence of very dangerous prickly bush, about fifteen feet high." This the Amazons soon break through, although their feet are without shoes. The inhabitants, surprised in their sleep, are completely in their power. Such as resist are slain. "The others are tied around the neck with a small grass-rope, each soldier having that article, as well as a piece of chalk. Each soldier uses his own private mark on the back of as many slaves as he may capture, and also secures the scalps of as many as he murders in attack. After all is over, these slaves and scalps are presented to the King or Chief, who gives each soldier, according to the amount of his capture, a sum of cowries, as well as allows him to attach a cowry to the stock of his gun, which is reckoned an honourable distinction, and is given medals to civilized armies."*

The Amazons summon Gezo to the War.

We march for Abbeokuta, the royal Gezo leads!
Come, let us tell his greatness, and vaunt his noble deeds.
When he awakes to battle, who ventures to oppose?
He waves his kingly sceptre, and scatters all his foes.
Dahomey's royal leopard! Thou fierce-eyed eagle, hail!††
Swoop from thy lofty eyry, and make the nations quail!
Thy marshalled troops await thee, impatient for the fight,
And call thee forth to battle, for this is their delight.
Bring forth the standards, the war-drum beat;
Lift high each musket; the monarch greet:
He comes in the pride of royal state,
Honored the ground that bears thy weight.

Hail, to my valiant soldiers! The wished-for day is nigh.
We gird us for the contest, to conquer or else die.
Let every sword be sharpened, and hearts be void of fear:
Onward! The path is open, the foemen's neck is near.
The Anagoos are conquered, the Mahees are our slaves,
The Attapahms who fought us are silent in their graves—
We came, we saw, and conquered: each bore a scalp away,
And carried home a record of prowess in the fray.
Onward, Amazons! Rush to the fight.
Close on the foemen, put them to flight!
Wrestle for victory, prove yourselves brave,
Bring back to Gezo a scalp or a slave!

The War Song of the Amazons.

Forward, then, new scalps to win,
Hasten to the welcome battle;
Quickly let the strife begin,
Sharply let the muskets rattle.
The Fetishes assure us
The Yorubas shall women be;
They never can endure us;
They will not fight like men, but flee;
We'll tread them down
We'll win their town,
Gezo shall rule triumphantly!

They Come at length, a rabble rout,
We hear afar their noisy shout:
The robbers come in eager haste,
Our country and its homes to waste.
Like storm-clouds rising on the blast
A momentary gloom they cast—
The hurricanes will soon have past.
What though our enemies be near,
The Yorubas disdain to fear:
Our children and our wives are dear.
For these we peril precious life,
And mingle in the bloody strife,
Father for child, husband for wife,
Until the tyrant Gezo knows
He has not women for his foes.

Protector of the weak,
Subduer of the strong,
Thy powerful aid we seek:
Power and might to thee belong!
He who has mastered other lands
Marshals around his hostile bands!
Our warriors are bold,
Inured to war of old,
And, ignorant of fear,
They hasten forth with sword and spear
Bravely their homesteads to defend,
And for our liberties contend.
Ours was heathen night,
We had no gleam of light:
To idol gods we cried,
And served our sins and lusts beside.
This was a gloomy state, indeed,
Without a friend in time of need.
That night is changed to day;
We know to whom to pray;
We know that Jesus gave
His precious life our souls to save.
Our trust in Thee we now repose
To save us from our cruel foes.
Break the oppressor's arm,
Defend thine own from harm
E'en now the battle rages,
As host with angry host engages.
O Lord! Thy promised aid we claim:
So shall live to praise Thy name.

† By the kind permission of Messrs. Longman and Co. we copy this from Commander Forbes' recently published "Dahomey and the Dahomans." [back]

†† His people call him, The Leopard, and Kok-pah-sah-kree, a peculiarly fierce eagle. [back]

Subtitle(s): “The Amazons Summon Gezo to the War” | “Gezo's Answer” | “The War Song of the Amazons” | “Abbeokuta's Resolution” | “The Native Christian's Prayer”