In the Journals of our Missionaries at Abbeokuta we find much which affords to us satisfactory evidence of the progress of the work. The people are very anxious to hear the good news of the Gospel, and that, not only in Abbeokuta itself, where the Missionaries have been for some years resident, but in the neighbouring towns and villages. They seem, indeed, in this respect, to resemble a newly-ploughed field, which lies open to receive the seed which falls plenteously on it from the sower's hands. Nor is this all. In other Missionary fields the seed was long in springing up, and many years passed away before the hearts of the labourers were cheered by a single instances of conversion; but in Abbeokuta the seed is already coming back in produce. There are many who have cast away their idols as sinful and worthless, and, boldly professing the name of Jesus, have willingly endured for His sake the dislike and scorn of their relatives and friends. Our Native Catechist, and Mr. Thomas King, in the accompanying narrative, has related an interesting case of this description.

Oct. 28, 1850—This morning I went with the Rev. H. Townsend to see a sick Candidate, who had sent to him earnestly requesting to have the sacrament of baptism administered to him, as he found his sickness gradually gaining the mastery. 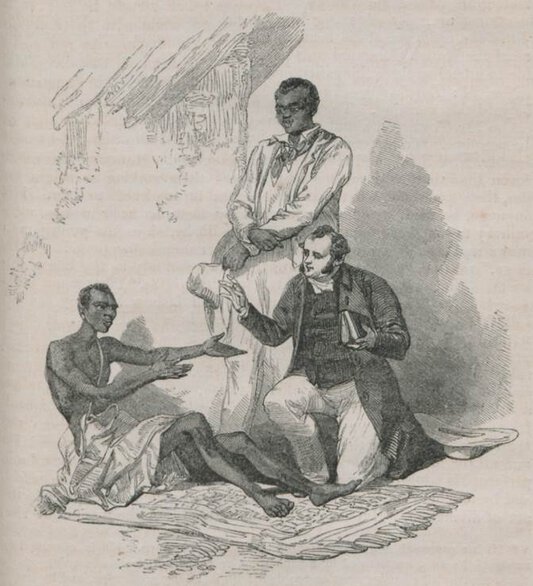 His answers to several questions proposed to him by Mr. Townsend were such that it would have been unjustifiable to refuse him his request, especially under such pining disease. "Why do you wish to be baptized?" asked Mr. Townsend. "Because Jesus has commanded it to be done to every one that believes in Him."—"It is, then, answerable to the heathen amulets, as a means by which you hope to be preserved from sickness, death, and other evils?" "By no means: it is only an outward sign of an inward operation by the Spirit of God."—"Administered to you, will your salvation be then completed?" "It will by no means be profitable to me without true faith in Jesus the Savior."—"Do you, then, believe in Jesus?" "O yes! with all my heart; and I hope that He will enable me more to trust in Him. I know that I am unfit; but as I cannot tell how it will fare with me in this sickness, I therefore wish to receive the sign which Christ has appointed as a means for salvation." After this, he was baptized by Mr. Townsend, in the presence of more than a dozen individuals, Communicants and Candidates, who went with us, and some of the household. After this, some words were spoken to those of his unconcerned and careless relatives present for about an hour; by which an emigrant who came with us from Sierra Leone was so convinced of the utmost necessity of casting his lot with the people of God, that he quitted the residence of his heathen relatives the same day, to live with one of the Native Communicants who went with us, where he would be able to attend to these things without molestation.

Nov. 24: Lord's-day—The above sick young man was brought to the yard this morning. The most influential man among his relatives sent to Mr. Townsend about a fortnight ago to take the young man to our premises. To ascertain the real cause of this message, Mr. Townsend sent Mr. A. Wilhelm and myself to make inquiries. He assigned no other reason than that, as the young man refused their making sacrifices for him, they knew not what assistance would be rendered to him. His language, he said, was not understood by them, as their words were contrary to his. We inquired how this could be, since the young man knows and speaks no other but the same common language. "His views," said he, "are contrary to us, neither can any in the house understand him. As long as he refuses to worship Ifa,* I know not what other help could be rendered him, neither will I show him any favour. Tell the gentleman that I am quite sincere in what I said. If he is better, he may remain with him in his yard; but should the sickness terminate in death, he may bury him: we cannot help it." What provoked them to be so much disgusted with the sick man, I am informed, was the violent insult he once offered to Ifa, when, in spite of all his remonstrances, this head man of their family determined to consult Ifa on his behalf. On a certain day, when the babbalawo, whom the head man brought for the purpose, had taken his seat, and spread Ifa and all the instruments, the sick man was requested to come forward and perform his adoration by prostration on the ground before the priest, and by touching the nuts with his forehead, all which are to precede the act of divination. But the young man refused. As he would not rise, it was then proposed that Ifa should be handed to him, in order to touch it with his forehead, but even with this they could not get him to comply. His relative, the employer, then remarked, that as they could easily perform the ceremonies were the sufferer to be absent, they might deal with this case just in the same way, and therefore bade the priest to proceed. At this crisis, the sick man, who in the mean while was contemplating how to put an end to all their imposing cheats, nimbly got up, on which they supposed he was now inclined to comply with their wishes; but on the contrary, to the astonishment and displeasure of all, he took hold of the nuts, and scattered the whole in the yard. Enraged by such daring conduct, the chief relative threw the sick young man down by such a violent push that those present supposed him to be dead. The whole party being in confusion were then dispersed. The babbalawo, without a word to his employer, departed in haste. The poor man, coming to himself after a while, got up and went into the house. This is the source of their animosity to him, from which even his mother is not exempted, but seems, as it were, to be hardened against her own son. They troubled him greatly after this to give up his faith, but, finding they could not prevail, their hatred to him was the more increased. But the young man, instead of being shaken in faith, was firm and resolute; and, far from being sorry for the proposal made by the head man, he was rather much pleased to come to the yard. Their bitter hatred to him has given him sufficient reason to suspect that, in case of danger, such as outbreak of fire, they might leave him to perish. The poor man, since his entrance into the yard, has met with parental care and attention from Mr. and Mrs. Townsend. How forcibly is the Saviour's saying verified in the case of this young man—"I am not come to send peace on earth, but rather division!" Neither is David's saying less applicable to him—"When my father and my mother forsake me, then the Lord will take me up."

This poor fellow has since entered into rest. During his illness he was often cast down under the deep sense of his unworthiness; yet at other times he was enabled to rejoice in the hope place before him by the Gospel of Jesus. On one occasion, when asked by Mr. King what he thought of the Lord's dealings with him, he replied, "Oh, very kind and loving indeed is He to me—more than any parents." "What! is it kindness to suffer you to be thus afflicted, while many of your companions are in full vigour and strength?" "O yes! very indeed;" and then he entered into a long detail of all that he had passed through since the commencement of his sickness: how, when in ignorance of the promise of mercy in Christ, he was repeatedly tempted to commit suicide, but, being discovered, was providentially prevented. That he should have been spared to hear the glad tidings of salvation, appeared to him an uncommon mercy; and heartily did he bless God that he had not been suffered to plunge himself into endless misery. His mother, finding that there was no hope of his recovery, wished to have him removed to his grandmother's place, that there, taking advantage of his weakness, they might practise their idolatrous rites. Mr. King questioned him, to see whether he felt disposed to go. "Do not," he said, "entertain any fears for me: not while there is breath in me shall I go there." Most grateful was he for any thing that was done for him. Entering his room suddenly, Mr. King on several occasions found him on his knees. Often, with deep interest, did he speak of the rest to be found in Jesus, and as long as he had the power of utterance continued to express his hope in Christ. "The last time," says Mr. Townsend, "that I saw him alive, when almost past consciousness, he had lying by his side his books, which I understood from his mother were placed there at his desire—doubtless, a last testimony that he continued 'a book-man' and a Christian."

* Ifa is a supposed deity, represented by sixteen palm-nuts. He is consulted by means of the nuts, manœuvred by a babbalawo, or priest. Before commen[c]ing operations, the inquiring parties must evince their faith in Ifa by prostration, and by touching the nuts with the forehead. The priest then gives to some of the bystanders pieces of broken earthenware, or something of the kind, some representing a favourable, others and unfavourable response. Having also whitened a board, he shakes the nuts within his hands, and with his right hand grasps a number. Some are left in the other hand, and the babbalawo makes marks accordingly on the whitened board. He now asks for one of the pieces of earthenware, and declares whether Ifa's answers be favourable or not. The people being ignorant as to what pieces represent favourable and what pieces represent unfavourable replies, they are altogether at the mercy of the priest's arbitrary declaration. If the response be adverse, the babbalawo says the applicants must sacrifice, and Ifa is again consulted as to what sacrifice he requires. The answer may be sheep, goat, fowls, &c., as the necessities of Ifa—or the babbalawo—may render most desirable.—Ed. C. M. G. [back]