THE colony of British Guiana is covered with vast forests, which are traversed by no foot of man, except that of the wary Indian in pursuit of game. There the panther has its lair, and the jaguar prowls for his prey. Amidst the magnificent timber-trees macaws of splendid plumage may be seen, and flocks of parrots, as numerous and noisy as rooks in England; and there may be seen, hanging in clusters from the branches, vampyre bats, the largest of which such the blood of men and animals when sleeping. Nor are these the only inhabitants of these forests. Serpents are there of enormous size, and mostly of a venomous nature. With these the Indian wages a deadly warfare, destroying them wherever he meets them. They are the objects of his disgust and hatred: nor is this surprising, when we remember how painful and how fatal the wound of the serpent is to man. A British-Guiana Missionary writes—

It has been my lot to witness, on more than one occasion, the effects of the bite of the labaria; and there is perhaps no person who has lived for years in the interior who has not been in imminent danger at times from the proximity of some of these creatures. I have, however, only heard of one instance in which a full-grown man has been seized by one of the boa species. This occurred in the swamps of the Akawini. The reptile, a large camudi, sprang upon him, and coiled round his body, confining one of his arms. Providentially, before it could master the other, his wife, who was near, handed him a knife, with which he inflicted a deep cut, causing the snake to quit him, and make its retreat. The Indians, also, once told me of a large camudi having been killed in a state of torpidity, which had just swallowed a boy of the Caribi nation.

To any one who knows what destructive creatures abound in these forests, it is surprising that accidents of this kind do not more frequently occur. But the great characteristic of the Indian is caution, and his keen eye and acute hearing are constantly exercised by the nature of his situation. 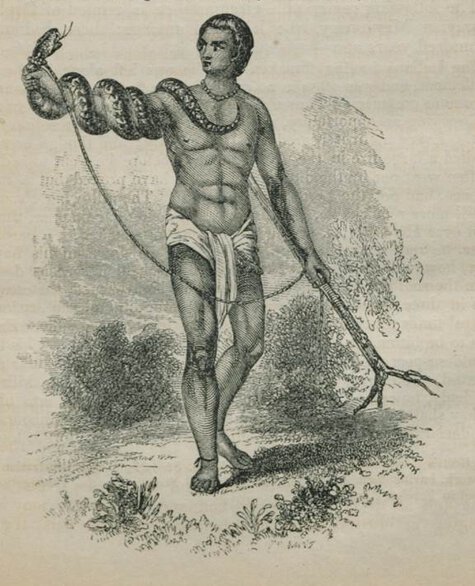 He displays a subtilty of artifice in capturing these reptiles equal to that which is usually assigned to the serpent himself. I have seen an Indian creep under a low bush on his hands and knees, and capture a kolokonaro by means of a noose, which he dropped over its head with a forked stick as it raised it to look at the intruder: the stick being then quickly placed on its neck, and the noose drawn tight, the reptile was hauled forth, and its capture completed. In this manner the Indians catch such snakes as they wish to preserve alive for sale. If the snake be not too large or venomous, the man grasps it tightly by the neck, and allows it to coil itself round his arm [see the engraving], until he is able to place it in secure confinement. The kolokonaro was only about five feet in length, but so thick and strong that the Indian who carried it was soon obliged to call for assistance, to remove the snake, and release his arm from its pressure. This species is beautifully marked with brown, orange, white, and other colours. It is sometimes called the land-camudi or boa, to distinguish it from the other camudi, which takes to the water, and is found in damp places. They both attain to a great size.

Some of the larger snakes are said to attain to upwards of thirty feet in length. I never saw any near that size. The largest that I knew of was about twenty feet, and was captured by some of our Indians in a similar manner to that related above, while gorged with food. They then tied it to the stern of a canoe, and towed it through the water to the residence of a settler, to whom they disposed of it alive.*

The following remarkable circumstance is related of Daehne, the Moravian Missionary, who laboured amongst these Indians about a hundred years ago—

The Indians have forsaken him, he was left alone in the Mission Settlement, and was often in no small danger from wild beasts and other venomous creatures. Thus a tiger for a long time kept watch near his hut, seeking an opportunity, no doubt, to seize the poor solitary inhabitant. Every night it roared most dreadfully; and though he regularly kindled a large fire in the neighbourhood before he went to bed, yet, as it often went out by the morning, it would have proved but a miserable defence, hand not the Lord preserved him. The following circumstance is still more remarkable, and illustrates, in a singular manner, the care of God over His servants. Being one evening attacked with a paroxysm of fever, he resolved to go into his hut and lie down in his hammock. Just, however, as he entered the door, he beheld a serpent descending him in three different places; and, pursuing him closely, twined itself several times round his head and neck as tightly as possible. Expecting now to be bitten, or strangled to death, and being afraid lest his brethren should suspect the Indians and murdered him, he, with singular presence of mind, wrote with chalk on the table—"A serpent has killed me." Suddenly, however, that promise of the Saviour darted into his mind, "They shall take up serpents, and shall not be hurt." Encouraged by this declaration, he seized the creature with great force, tore it loose from his body, and flung it out of the hut. He then lay down in his hammock in tranquillity and peace. This was most probably a boa-constrictor, whose bite, though painful, is not venomous, and which destroys his prey by crushing it to death and gorging it whole.

* Brett's "Indian Missions in Guiana," pp. 35—37. Our illustration is from this work having been kindly lent to us by the Society for the Propogation of the Gospel in Foreign Parts. [back]