OUR friend Tamahana Te Rauparaha, the New-Zealand chief, is now on his way to his native land. He has bid adieu to the shores of England, and all his friends here, who loved him as a true Christian man, and is crossing the wide, wide sea which spreads between England and New Zealand.

He has left us a sketch of his own remarkable history, in which we are enabled to trace the way in which the Lord led him, and how he has been an instrument of much good to his own tribe and people. Tamahana lived 500 miles distant from the Missionary stations, nor had any of the Missionaries ever penetrated so far. But a native youth, who had been in the Missionary schools, wandered down thither in search of his friends, and from him Tamahana first heard about the gospel. One of the people who had come with this young native had a copy of the New-Zealand Testament, which has been printed at the Mission premises, and from this Tamahana learned to read. He undertook a voyage to that part of the island where the Missionaries lived, and brought back the first Missionary to his tribe. The preaching of the gospel has been much blessed to them: they are now, all of them, professing Christians, and many of them, we trust, are such "in spirit and in truth." Loving the gospel himself, Tamahana has endeavoured to forward it amongst his countrymen, and to improve their characters and habits. At one time, when other chiefs were disposed to go to war with the English, he persuaded them to peace. It was then that he became strongly convinced of the necessity of giving useful occupation to his people, and leading them onward in the path of improvement. We give now his own account of the measures adopted by him to bring this about.

My heart said, "What shall I do for my people to make them work, not to be too much idle? For if they were idle, then there would be too much talk, and fights would come."—When I was at Auckland, I had read about Peter the Great, king of Russia, who learned to work that he might teach his people. My heart had thought I should be like him.—Then I had a meeting after prayers in the evening. Many people came. I said to my people, "It is the wish of my heart to make a town like the white man's." Then they said, "It will be very hard. We cannot do it." But I said, "The English have only two hands, and two feet, and one heart; not four hands, or four feet. We, also, have the same number. The only difference between us is, that their skin is white. Let us try." Martyn* said so too, and another chief. Then the people said, "Very well." I said, "Let us build the church first, then our houses. God's house first, man's the second, then He will bless our work." My people said, "Very well." Then I said, "Go and cut the wood." They went, and I went too. We had no minister then. He was sick at Wellington. God alone was our minister. We finished the church. It was but a little one; not the large one my father had begun. Then my people began to make their own houses. But some liked to stay in the old pa, in their little dirty houses, and not come to the new town; so I burned all the old houses in the old pa. It was a very great fire. The flames rose up high: the people cried when they saw them, but I did not. I was very happy to burn all the bad ways. I told them not to make little houses, Maori way, but like English, with two rooms and a chimney, and only one family to live in one house. Then I built my house.* I made four rooms, two down stairs and two up stairs. It was made English way, with Maori carving. All the English liked my house, but I do not like to talk about it, lest it should seem proud. Then all the people made their houses English way. It was the first time a Maori town had been built English way. 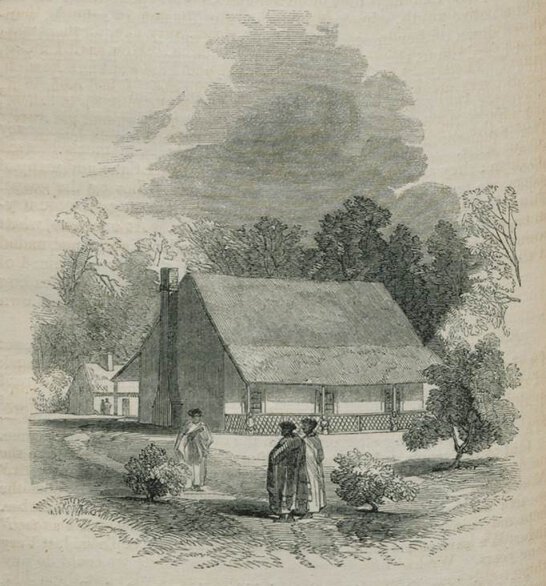 Then I began to think again. I thought, "What shall I do? The town is finished, the church is finished, the houses of the people are finished. What shall I do?" I thought, "I will go and buy a cow." We had no cows then. It took a great deal of money to buy a cow at that time. I sold some land to the English, and my friends lent me some money the English had given them for making the road. Then I went to Wellington to buy a cow. When my people saw my cow they laughed. They said I was proud, taking the English ways. I said, "Never mind, you will see." By-and-bye the cow had a calf. Then I thought very much. I said, "What shall I do? I do not know how to make milk or butter, but I will try." So I got some flax and made a strong rope, and I caught hold of the cow, and tied it round her horns, and tied her very tight to a tree. My people feared the cow very much: they all ran away. I milked the cow: I milked her every day, for there was no one else who could do it then. Then I thought, "How shall I make butter?" There were no English to teach me, and I did not know how. I thought very much, and I prayed to God to help me. I had read, in a newspaper, that one way to make butter was to tie the milk up in calico, and put it in the ground; but I feared to do that, lest it should get dirty. Then I thought of a bottle. I found one, and I put the milk into it. I shook, shook very long, till I was tired. Then I gave it to my wife. She shook, then she grew tired, then I shook again—a long time. The afternoon came, and the sun began to go down, but the butter did not come. Then I was very sorry. I thought, "This cannot be the right way, it is so long." But then, at last the butter came, and we all laughed, and were very happy. Then Ruta [Ruth, his wife] put it in water, and made it all right.

* A cousin of Tamahana. He accompanied him in his voyage to the Bay of Islands for a Missionary, received the gospel, and was afterwards baptized, with Tamahana, by the name of Henry Martyn. [back]

** Our engraving is copied from a sketch taken on the spot, and kindly furnished to us by a friend. [back]